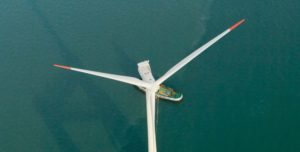 Portuguese company Windplus will receive a EUR 60 million loan under the InnovFin Energy Demonstration Project programme to install a floating wind farm off the coast of Portugal.

Windplus is a subsidiary of EDP Renewables, Repsol and Principle Power

Located 20 km off the Viana do Castelo coast, the project will speed up the commercial roll-out of a novel technology called WindFloat that enables the  harvesting of abundant wind resources in deep waters where mounting foundations on the sea floor is not possible.

The EUR 60 million loan is being granted by the European Investment Bank (EIB) and supported by the European Commission through the Energy Demonstration Projects facility, a thematic investment programme under InnovFin – EU Finance for Innovators, which works with funding from the EU&#8217;s research and innovation programme Horizon 2020.

The project will also receive funding from the EU”s NER300 programme and the Portuguese Carbon Fund.
The European Investment Bank (EIB) has granted today a EUR 60 million loan to Windplus S.A., a subsidiary of EDP Renováveis (79.4%), Repsol S.A. (19.4%) and Principle Power Inc. (1.2%). The company plans to build and operate a first-of-its-kind offshore floating wind farm, using semisubmersible platforms located off the northern coast of Portugal, 20 km from Viana do Castelo at a depth of 85-100 metres.Emma Navarro, EIB Vice-President, and Joao Manso Neto, CEO of EDP Renováveis and Windplus representative, signed the agreement today in Lisbon. The EUR 60 million loan will finance the floating wind farm with the support of the InnovFin Energy Demonstration Project facility, which is funded under the EU”s current research and innovation programme Horizon 2020. In addition, the project will receive EUR 29.9 million from the EU”s NER300 programme, and up to EUR 6 million from the Government of Portugal, through the Portuguese Carbon Fund.

At the signing event, EIB Vice-President Emma Navarro said: “We are delighted to support a project that is a milestone for the renewable energy sector. Through this agreement, the EU bank is financing cutting-edge energy technology that will be deployed in Portugal and that will make it possible to install windfarms in locations that were not feasible until this moment, contributing to Europe”s leadership in developing innovative responses to the climate change challenge. This agreement is a good example that demonstration of the EIB”s commitment to financing innovation and climate action”.

Carlos Moedas, Commissioner for Research, Science and Innovation, said: “Today”s deal is another example of how EU financing is helping to lower the risk of rolling out innovative energy solutions like WindFloat. We need breakthrough technologies to accelerate the clean energy transition in Europe and lead the global fight against climate change. This will ultimately improve the quality of life and create new jobs and economic growth for citizens.”

António Mexia, EDP CEO, said: /The commitment to renewable energy, coupled with a strong investment in innovation, has been one of EDP&#8217;s strategic priorities over the last decade. Our group continues to expand its renewable capacity both in the markets where it is already present and by entering into new countries. The windfloat explores new promising technology and once again positions EDP as the world&#8217;s leading wind power company, now pioneering a project in the offshore industry. This new technology, suitable for deep waters such as those of Portugal, has already proved successful in its first phase under demanding conditions,and this new phase marks a steady transition to an ambitious commercial stage /./

Antonio Lorenzo, Repsol CFO, said that “this pioneering project reflects Repsol&#8217;s commitment to innovation and the energy transition. As a multi-energy supplier, generating low-emission electricity is a priority”.

Joao Metelo, Principle Power CEO, said that “this financing represents a major milestone for Principle Power and for the floating wind industry as a whole as it fully demonstrates the financiability of the technology, and its readiness for commercial deployment globally”.

The project belongs to the Windplus consortium, which is jointly owned by EDP Renováveis (79.4%), Repsol (19.4%) and Principle Power Inc. (1.2%). The facility comprises three wind turbines that sit upon floating platforms anchored to the seabed at a depth of 100 metres. The wind farm will have an installed capacity of 25 MW, equivalent to the energy consumed by 60.000 homes over the course of a year.

The new installation represents a flagship project in the innovative sector of floating wind energy and will contribute to the development, standardisation and manufacturing improvement of multi-MW modular floating platforms, which is a key objective under the Strategic Energy Technology Plan (SET-Plan) of the European Commission. Two of the platforms will be manufactured in the dockyards of Setúbal, Portugal, and the third in the dockyards of Avilés and Fene, Spain.

It is estimated that nearly 80% of the offshore wind resources are located in waters 60 metres or more deep in the European seas where the cost of fixed-bottom structures is not economically attractive. The development of floating offshore wind technologies will make it possible to take advantage of cost reduction techniques employed in the sector which, combined with the higher capacity factor achieved in deeper water locations, will lead to significant reductions in the levelised cost of energy for floating offshore wind projects.
The EIB and climate action

As the largest multilateral provider of climate finance worldwide, the EIB is committing at least 25% of its investments to climate change mitigation and adaptation, supporting low-carbon and climate-resilient growth.

Under Horizon 2020, the EU research and innovation programme for 2014-20, the European Commission and the European Investment Bank Group (EIB and EIF) launched a new generation of financial instruments and advisory services in 2014 to help innovative firms access finance more easily. Until 2020, /InnovFin – EU Finance for Innovators/ offers a range of tailored products which will make available financing in support of research and innovation (R&I) by small, medium-sized and large companies and the promoters of research infrastructures.

Backed by funds set aside under Horizon 2020 and by the EIB Group, InnovFin – EU Finance for Innovators supports R&I activities, which by their nature are riskier and harder to assess than traditional investments, and therefore often face difficulties in accessing finance. All are demand-driven instruments, with no prior allocations between sectors, countries or regions. Firms and other entities located in EU Member States and Horizon 2020 Associated Countries will be eligible to become final beneficiaries.

InnovFin Energy Demonstration Projects provides loans, loan guarantees or equity-type financing typically between EUR 7.5 million and EUR 75 million to innovative demonstration projects in the fields of energy system transformation, including but not limited to renewable energy technologies, smart energy systems, energy storage, carbon capture and storage or carbon capture and use, helping them to bridge the gap between demonstration and commercialisation. The product is rolled out directly by the EIB.