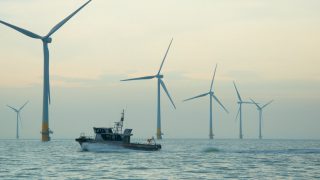 Following the announcement of new Contracts for Difference (CfDs) auctions in the UK, which will add hundreds of new offshore wind turbines, the UK Chamber of Shipping called for a more meticulous approach to planning so disruption to shipping could me minimised.

The UK government has announced the first of the new CfD rounds for May 2019, and intends to run subsequent auctions every two years after that. At the same time, the Crown Estate has received eight applications to extend existing wind farms, which could add a combined 8GW of additional capacity for power generation. Separately, a new round of seabed leasing for offshore wind developments will be marketed next year.

Such developments could potentially see 1-2GW of new offshore wind capacity (between 60 and 140 turbines) every year during the 2020s, the Chamber said.

/Our paramount concerns are the preservation of navigational safety for shipping and mariners, and minimising the additional emissions and fuel costs caused by vessels deviating around windfarms,/ said Robert Merrylees, Policy Manager & Analyst at the UK Chamber of Shipping.

The Chamber said it fully supported offshore wind as a means to decarbonise the UK”s energy mix, however, it highlighted that coordination and forward planning were essential to ensure new wind farms do not endanger vessels, lives or the environment.

Robert Merrylees, Policy Manager & Analyst at the UK Chamber of Shipping, said: /To mitigate these risks to safety and the environment, we are calling for thorough and careful consultation and open, transparent planning of any new windfarm site. We would like to see greater coordination between the Crown Estate, Marine Management Organisation (MMO) and other marine stakeholders when planning the location of new leasing sites to minimise disruption to shipping. Marine spatial planning can provide the basis for this but is often overlooked./

/On a small scale, this would include ensuring that turbines do not obstruct the most direct routes for vessels underway between ports pairings, by calling for developers to be flexible in their layout of turbines, in accordance with MCA guidance, so as to minimise any deviation for commercial shipping,/ Merrylees said.

/On a larger scale, the planning process should reduce the potential for deviation over long distances, so that vessels do not need to zigzag around or between different windfarms, particularly those located in the waters of the UK and those of different exclusive economic zones (EEZ). To do this, there needs to be coordination between offshore wind developers internationally as well as with the shipping industry,/ he explained.